Towards the end of last year, I decided to travel to the other side of the world, solo, with my eight month old daughter. It was quite a daunting prospect, but a necessary one, seeing as she hadn’t yet met the majority of my side of the family. My husband sadly couldn’t join us as he had to work, ahem, watch the Rugby World Cup, ahem, I mean work.
As an avid babywearer, taking a carrier wasn’t the issue, but choosing which carrier(s) to take with me was a mindboggling question. My considerations before travel were:
a) it had to be super comfortable to wear over long distances while carrying luggage and pushing a trolley,
b) it had to be comfortable for me if she fell asleep in an airport/train/coach on me and I had to recline back,
c) it had to be lightweight,
d) it had to be easy to ‘disrobe’ at airport security (should that be necessary – I found out that not all security doorways require you to take off your baby, regardless of what part of the country you enter. It did appear, however, that it was only when bubs was asleep that I had to completely remove her, handy!).
I didn’t own a Manduca or an Ergo which would have been my first options, although I could easily have hired one from the Babywearing Wellington Library, but I wanted one of my own, so I invested in a mei tai, suitable for back, front and hip carrying.
Another question pre-travel was whether to take a breastfeeding pillow with me on the 29 hour, 2 stopover journey. Bubs was 90% breastfeeding and 10% on solids, the pillow was bulky but not heavy, and although a bassinet was booked, she tended to sleep better on me, as did I, rather than wake only when she was loud enough to do so. 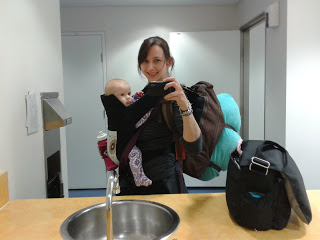 Another consideration was to have a shawl or cover for helping give her some sensory deprivation while travelling through bustling, busy, brightly lit areas such as airports.  This shawl also doubled as an easy to make ‘pouch sling’ for general carrying about on my hip. 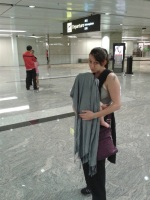 Therefore my ‘must-haves’ to travel with were now: a comfortable light baby carrier, breastfeeding pillow and a light blanket/cover. I took one backpack and one nappy bag.

I carried the nappy bag on alternative shoulders, but it was light, as nappies do tend to be very light. It was also a great height to perch on a seat, then perch the backpack on top of, while it was still attached to me, at train station seating for example. **Warning though, don’t forget you left the nappy bag on the seat on the platform, as you can suffer a mild heart attack when you spot it from the train. 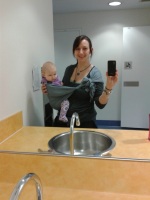 Our journey took us from Wellington to Sydney, a three hour wait for our next flight to Singapore, via Adelaide. You know, one of those handy ‘get everyone and everything they have with them off for an hour then back on again to the same seat’ stops. Singapore was a stop for a day, then it was non-stop to London. All those changes required lots of carrying baby on and off the five plane journeys, various security checks, various tube journeys, one taxi and one bus trip before ending up at my destination. My mei tai was a lifesaver. I have no idea how I wouldn’t have busted a gut carrying her through all those wait-in-line queues where you couldn’t take trolleys.

The great thing about carrying your baby and standing in a queue is that people will always talk to you and your baby. It makes a lonely journey interesting talking to people who ordinarily may not talk to you. They take an interest in your child and your child loves taking an interest in people. With carrying, they are at eye level and so don’t miss anything, and don’t get whacked by passing briefcases, unlike my shins.

When in Singapore, I had a short connection between airport and where I was staying. It is not illegal to travel with a baby unrestrained, but I fed the seatbelt around the both of us and made it clear to the driver to be slow and careful of other traffic. Ditto for the bus journey at the other end, seatbelt on at all times, although she did get confused as to why she couldn’t get out when we weren’t ‘moving’. Both of these times, the rocking of the vehicle made her fall asleep, so getting off didn’t require any transferring to a buggy, we just up and left. 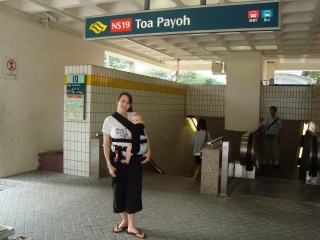 In Singapore airport, my flight was delayed 5 hours (booo!!) and she was just heading to sleep. This of course meant she would now be awake for the journey rather than sleeping through it. You go with ‘Babytime’, when they sleep, you sleep. I rocked up at a cafe, bought a milky drink, explained to the server that I had to sleep with baby, because of the sign that said ‘no sleeping here’, and set the alarm on my phone to wake me.

Train journeys are fabulous too. If anyone has queued at a station in the UK in rush hour, they will know it is not pleasant at the best of times. Wearing bubs is a lot easier than trying to negotiate the step between the platform and train with a lot of bolshy people thinking they should get in front of you first. And bubs can get out of the carrier on a train and clamber all over the seats (I wouldn’t recommend the floor though).

Short journeys at my destination which required one overnight bag were easy with a baby on the front and a backpack on the back. As baby’s weight was counter-balanced by the backpack, it doesn’t feel uncomfortable, but I would suggest a certain level of fitness for the sheer weight I was carrying – 7kg on the back, 8kg on the front.

Don’t get me wrong, the buggy had its place, and for me it was either at home and at the other end, not during transit. It was wonderful for Nana and Grandad to take their little angel for a walk to the park and to feed the ducks, and she often fell asleep and slept happily in their back gardens in the autumn sunshine.
So I’d say using a baby carrier to travel with makes the journey both much easier and much nicer. From the hands-free aspect to the random conversations with strangers prompted by wearing a cute baby, it makes things a lot smoother. Plus having baby so close during a journey surrounded by strangers gives you both a little bubble of love to shield you from the hustle and bustle of travelling.